Pebble toys are hand knitted and crocheted by women in a workers’ co-operative in rural Bangladesh.   Living in the rural areas in very hard work. However conditions are generally better than the alternative of working in a sweat shop in a city like Dhaka. The women work as subsistence farmers and looking after their homes. Creating the toys is fitted in around their other responsibilities. The work is sociable as the women gather together to knit and crochet and the children and grandmothers join them. Best Years are the company who import the toys form Bangladesh. Here is an exert from their blog about one experience they had when visiting the workers.

‘I think it is fair to say that Mita has no idea of how much she impressed us when we first met her. Pebble toys is structured so that workers are loosely organised by a supervisor. The supervisor checks the quality of their work, fills in the paperwork so that head office know how many pieces to expect and administers the payments to the workers. It’s a very responsible job because they can’t afford to make mistakes. For this they are paid a set amount per piece made by their centre, plus they also crochet themselves and earn a piece rate per item. They have to be responsible, organised, literate and prepared to be unpopular.

Back in 2012 we visited the Pebble rural centres with Morshed, the CEO of Hathay Bunano. As far as Pebble toys is concerned he is the top dog, you don’t get any more senior than that.

Mita was 19 years old and worked at a centre about a mile away from her village and walked in everyday. She wanted to set up a centre in her own village and act as supervisor and had already accumulated the 15 women who would be happy to work for her.

In order to start the process Mita had to stand up in front of dozens of women and make her case to Morshed. She was so nervous that not only were her hands shaking but also her mouth trembled, but she made her case and answered the subsequent questions calmly and well.

She had already identified a place they could work, and a potential work force to make the toys and prepared her case as to why she was good enough to be a supervisor.

How many 19 yr olds do you think could do that?

Mita got her centre and has already built up the number of workers significantly. She is unmarried and still in education which may not sound a lot for a 21 one year old in this year but is great news in Bangladesh.

When we visited in Dec 2014 we heard from Rayhan that Mita had done so well that she wanted to set up a pre-school to support her centre. We were so proud to volunteer to pay for her school and this was opened in 2015. 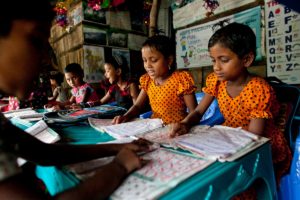 Mita probably doesn’t remember meeting us, but she is what fairtrade is all about. Give people a way of helping themselves and so many of them will surpass expectations, and that is what Pebble does so well. When you purchase toys from Pebble, you are literally helping to change lives.’